The idea of transforming a guitar came to me after my first stay in Benares in 1998. Wanting to introduce me to the classical music of North India, I took classes with sitarist Amar Nath Mishra on a folk acoustic guitar, 6 strings. I had to admit, however, shortly thereafter that the limitations of this instrument would not allow me to fully explore the ragas of North India. I found myself facing a choice:

1. To change the instrument, to familiarize myself with the sitar, the sarode or the Mohad-Vina (slide-Indian guitar which is played on the knees with a stone)

2. Enjoy my experience and my guitar technique since 1974, and therefore adapt a guitar to interfere in the vibrations of Indian music.

I took the second option & started to conceptualize the sit-guitar

The mental elaboration of the instrument, materialized by a guitar prototype with Indian sounds.

Certainly, I am not the first guitarist to be attracted to Indian string instruments and the similarities of sounds / techniques between guitar and sitar or sarode. To name just one, let’s mention the most famous of musicians who have embarked on this type of transformation, John McLaughling. For my part, I knew quite quickly define what I wanted as an instrument, the process of transformation was initiated. I did not want to build a non-tempered instrument with removable freets. It seemed essential to me to keep the opportunity to play chords … I wanted to change some aspect of the guitar and make this instument acquire new skills.

Path in the development of a new instrument My first idea was the addition of a drone named chikari. The Chikari consists of 2 or 3 small strings used to punctuate the different types of musical discourse specific to Indian music granted on the SA (do) or SA PA (do, sol). For this addition, I bought a Takamine 12 strings of average bill, limiting the damage in case of failure in the realization of the project. Why a twelve string? because it seemed to me essential to have at my disposal a sufficient amount of mechanics for the addition of new strings and a handle capable of withstanding a tension stronger than a normal 6-string guitar. The wider neck would allow me to pull the strings more easily in a downward movement (sitarist bending technique).

1st step, Upholstery of the saddle
Modification of the saddle to support the chikari strings, addition of an additional saddle for the sympathetic strings 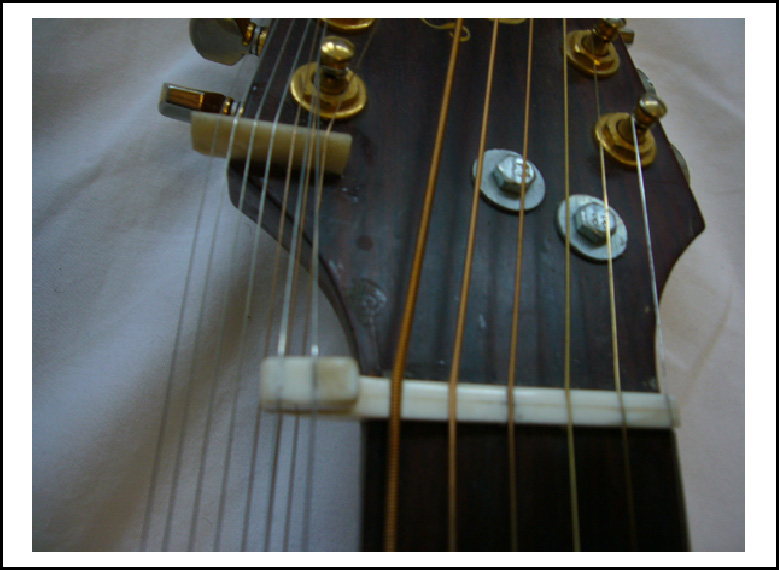 The 2 nuts in the sleeve follow a break due to a too strong tension on the latter. 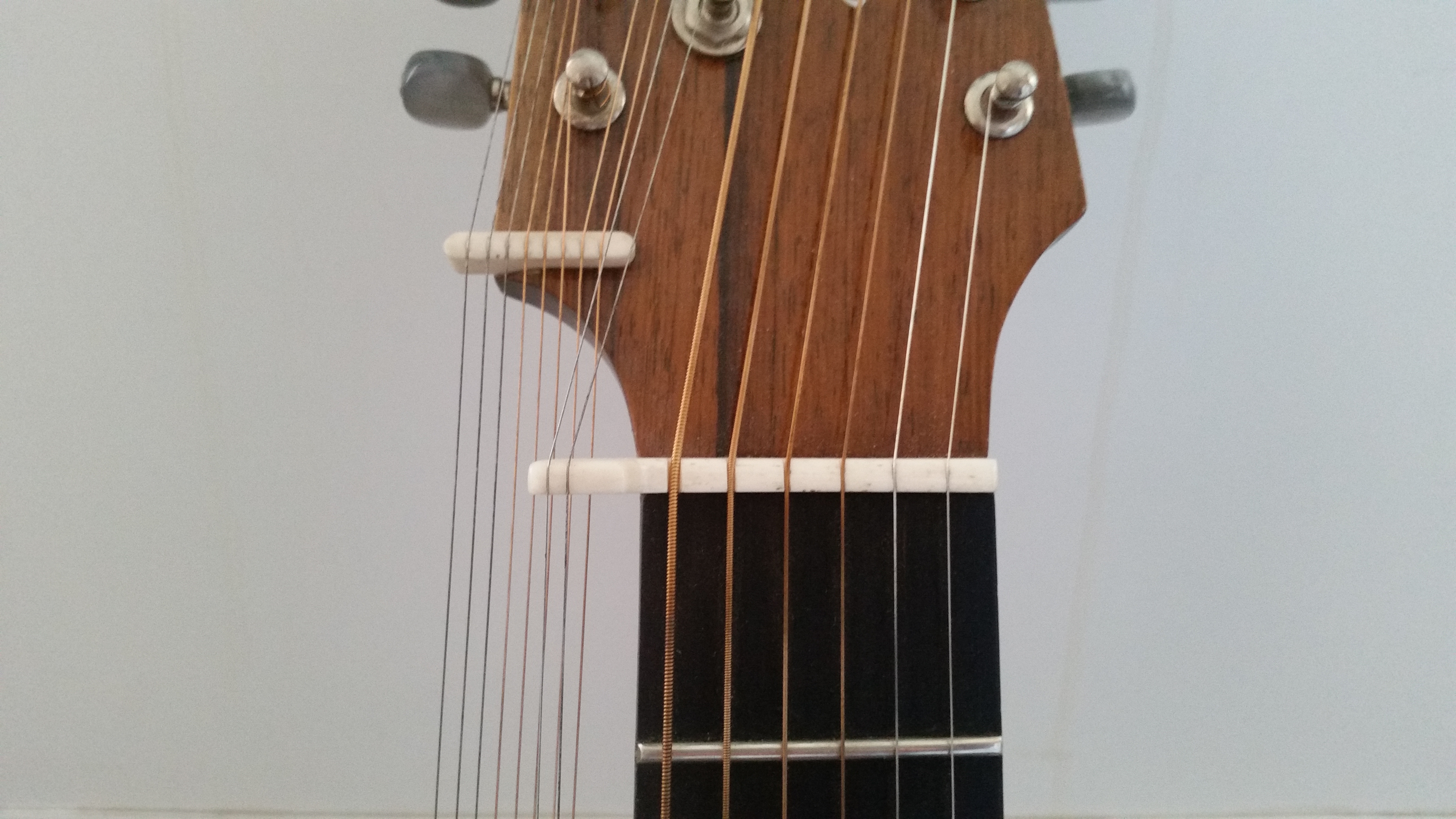 Addition of new strings on the bridge The first difficulty encountered was to find a support to tie the ropes that were not facing the handle. 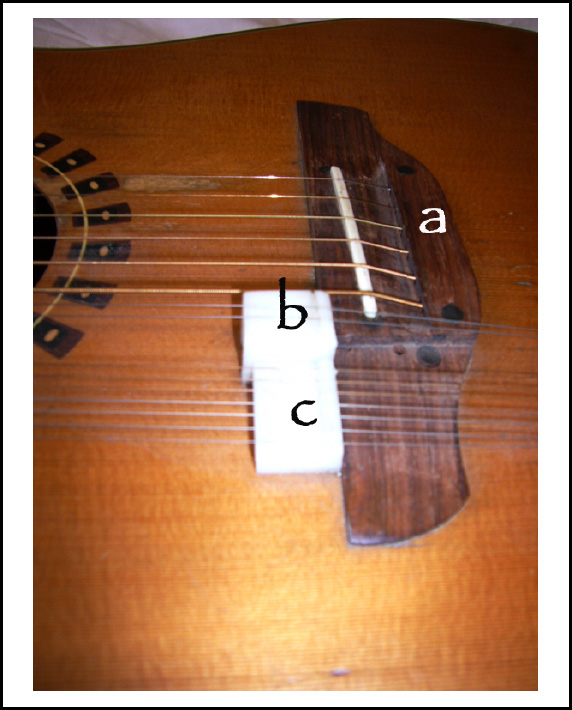 The 6 strings played (a)  2 strings of Chikari, which are found on almost all Indian instruments, like a drone. (B)
8 sympathetic strings called “taraf” (c).
It was necessary to find a position on the guitar case to stretch the strings of Chikari and Taraf. 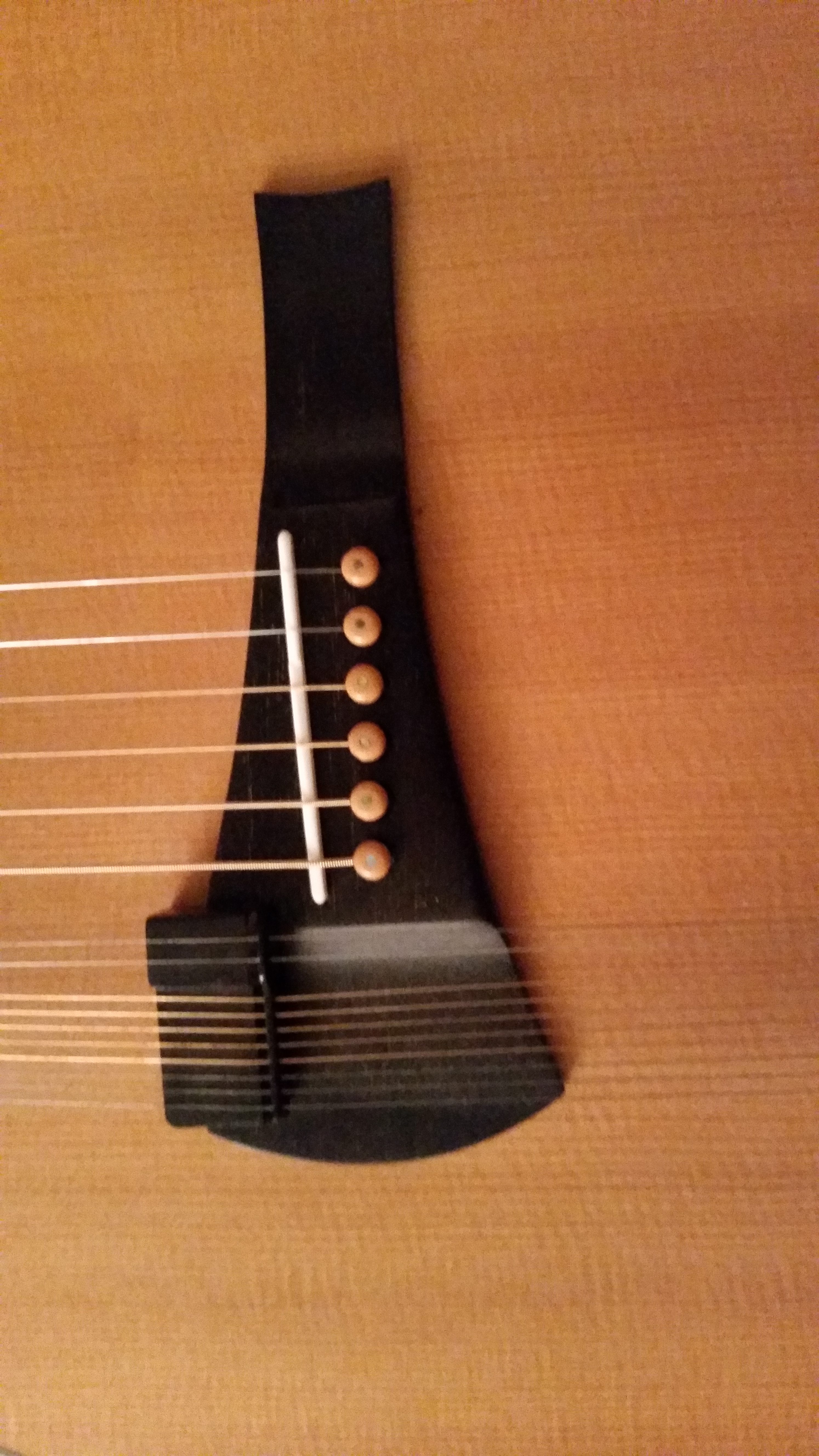 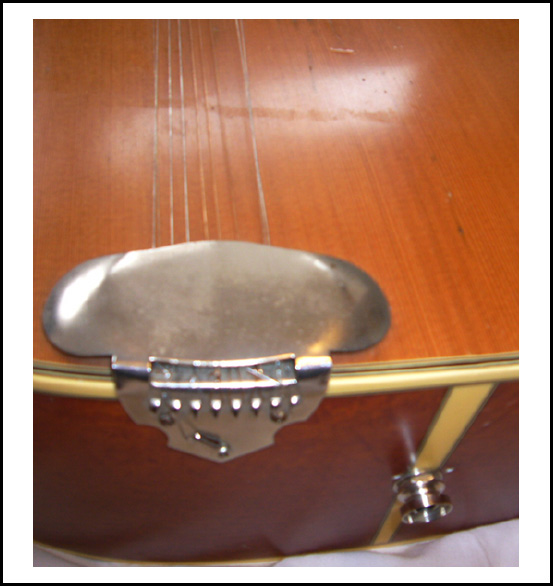 I wanted to add a new easel on the crate. This option, very expensive, did not prove judicious. The table of the guitar would not have supported the tension. Following the recommendations of luthier Vincent Zanetti, I opted for a mandolin tailpiece.. 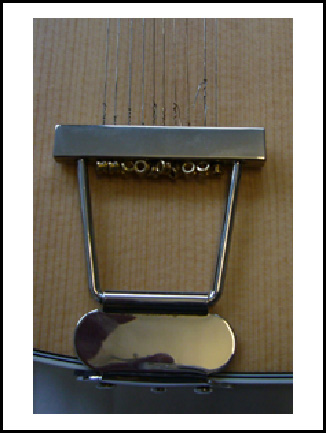 To obtain an extension of the note similar to the sitar, I had to adapt a bridge, wide and domed (Djavari), causing this sustain typically Indian. The Djavari was made in Delhi by Ajay Das and his father (Rikhi Ram store). These two passionate people, rich in color and knowledge, have always provided me with valuable support throughout the instrument’s design. The first modifications thus made, I defined the tone of the instrument: D (D) and began to work the chikari technique.

Addition of 2 djavaris at the nut level in Delhi at Ajay Das, I built 2 new djavaris; one, heightened, for the 2 strings of chikaris, another for the 7 strings of tarafs,

2nd step, Gauge of the strings.
Bend and slide technique During the first year, it was very difficult to find the right gauge for each of the 6 strings. The techniques of the mind (bend down as a sitarist or glissando as a sarod) and gamak (fast modulation between 2 notes), hard to achieve for a non-initiate, are painfully felt at the fingertips by the tension that is imposed . I was then tempted to put thinner strings in order to have less pain. But these strings did not have enough volume and they curled. I even tried for a short time, a string “plain” in bronze for the floor, which was to allow me to “slide (slide) without noise, the rope systematically broke. It took me more than a year to find the right gauge for every string. with which I still play today. D 58, A 42, D 30 G 20 B 15 E 11. This set of strings is not on the market as such, it is very unconventional. I was tempted to curl my sleeve like a sitar. However, after a long conversation with Roy Chaudury, one of my teachers in Delhi, I gave up. We were in 2002, I was already no longer a novice. Roy then advised me to be content with the limitations of my instrument, and to take advantage of it. Indeed, by the technique of bend, I pulled on some strings and could go down to 2 tones why to lose more months to transform an instrument rather than to devote this time to play music with the instrument that I had designed. Years later, I remember this moment as one of the key moments of the journey that I made.

The transformation seemed to be over, the strings were vibrating. They gave me a sensation never equaled by any other instrument I had played before. However, I perceived that I still missed … friendly strings. 5 notes sounded in sympathy, if it were possible for me to adapt 7 or 8, I could cover all the notes of a raga, entirely, on an octave. It was a new challenge. How to fix new mechanics on the head of the guitar neck? Random conversations, it was suggested to me to adapt Banjo mechanics. This was the key to the problem. Mechanics that tuned from the underside of the handle without gear reduction, or quarter turn. I was then eager to fix two, then three of these mechanics in Geneva, completed by a new trip to Delhi, to remake a new Djavari. From that moment, I had the feeling of “completion” of the Sit-guitar. The metamorphosis had taken almost 5 years. It was November 2004, and the prototype was finalized.

3rd step, Construction of a new 16-string guitar
At this point, I had an instrument that certainly filled me a lot, but that remained only a prototype. Therefore, I decided to build a sit-guitar and went looking for a guitar luthier. After a few months, my investigations led me to choose the MOON luthier, in Glasgow (Scotland) to whom I communicated all the instructions specific to the realization of my instrument. I also chose woods, Mozambique rosewood, Siberian pine, ebony.  The making of the guitar took a little over a year I went to Glasgow in late March 2007.  Mechanics on the Moon